A famous song of the twentieth century  by the famous Dame Vera Lynn, told of blue wings, bluebirds and planes that were fighting among the skies of the south of England.

The sweet ending of a long walk through the fog

When you come from London for one or more days, you need to rediscover those colors those shapes and sounds that sometimes seem to have forgotten, such as green, for example, or the blue of the sea, the frothy white of the waves with the sound that they break at the shore and give off the scent of saltiness, a bit melancholy, a bit nostalgic. That scent that reminds me of home …

Many years ago … the second world war, the country proud of his heroes.

The celebrated singer Dame Vera Lynn, proudly praising the notes of the song “the White Cliffs of Dover” the soundtrack of the Second World War, a hymn to the winged military heroes who fought on the skies of the south of England against the German air troops.

I remember that song so well that I can tell more or less all of it  by heart.Since my first days in London I have learned more songs, played back hundreds of times in my favorite old bar! It strikes me indeed to see even a statue entitled on the waterfront, in front of the harbour which appears  gloomy and melancholy, cold and nostalgic.

The train departs from London Victoria station and winds its way through the railways of the south east of England, until it reaches the seaside town in the Kent region, famous for its production of typical bitter red beers called “Ale”, classic and all-holly spirit, yellow-pale bitters and red brick coloured ones. Kent is a region of countryside, large draft horses and farms producing the country’s best dairy products, as well as northern Europe in general. In the evening, the port of Dover lights up like a party. Off the coast the blinking of fishing boats and small boats that look for crustaceans and seafood, create almost a crib of red and green lights, combined with the glow of the lighthouse that lights their way. We are very passionate about walking along the coast and following the sparkle of lamps, together with the suggestive smell of the little bells hanging from the street lamps, a festive sound that gives you peace and allows you to make peace with the noises that come only from the surrounding nature.A must is a visit up to the hills where the castle stands fiercely.it is there that we decide to head and spend the early hours of the morning. A long staircase leads us to the gates of the ancient structure which however, is closed as a set of a cinematographic shot. But nothing to worry, we observe the surrounding area that is not disappointing at all with

Sheeps and the castle

its undulating courtyards, as if painted by the hand of a first-grader child, who

uses the brush for the first time and enjoys drawing wavy landscapes, high and lows, predominating only two colors, the green and the blue of the sky!

How can he miss drawing the sheep in his portrait of nature! and here they are before us, with the soft blanket of the finest wool, proudly willing to be photographed and caressed. Our walk is interrupted only a few moments to admire them, unfortunately we do not have too much time available and we have to make the most of it; so we decide to move briskly to the shores, higher from which we expect the most impressive spectacle: the high and imposing white walls of chalk and limestone that mark the southern border of England with the Channel of the Channels, the ones you see in postcard or if you’re lucky, from the airplane window!

They are really high, we realize that it is not advisable to lean too much, although it is nice to try to photograph the overhang, between thrills of vertigo and that heartbreaking feeling of flying! The northern border of France and the city of Calais are not too far away, you can see them with the naked eye if you look carefully towards the horizon! you notice when you look at the phone and see that your connection is already under French band territory!

It’s all so magical to admire. The wind blows hard, it’s cold and there’s that gentle sea breeze that bathes your lips and nose. We could stop here and be content to take pictures and try to draw the horizon, but the walk is still long and the path climbs uphill, we decided to reach the lighthouse, where unfortunately there will be no more to walk since the road stops there.

We find everything that can be expected from the goal of a walk lasting three hours and a distance of 9 miles circa.

A large space to allow fans of photos to capture their moments, a playground for young and old fans of the most rudimentary entertainment such as “kites” made available by local management, together with rocking horses, but also small area. nic, observatories, and information center. there are skittles placed in order for an impromptu game of bowling among friends, 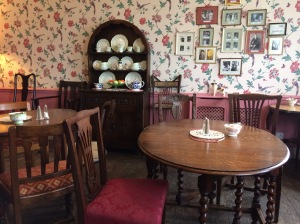 and a small white house on the side of the giant lighthouse off, where you can enter, warm up and order handmade cakes from a nice old English, who with extreme care he prepares us the warm tea, and serves us as if we were his nephews, to visit her. He explains that he has no lemons and she, her tea is served only with cold milk (in a simple and traditional way) as used here.
the living room resembles a magical fairytale environment, gramophones, wallpaper with Florentine rose, saucers and teapots of ornament, paintings of other times and black and white photos of ancestors of who knows who. 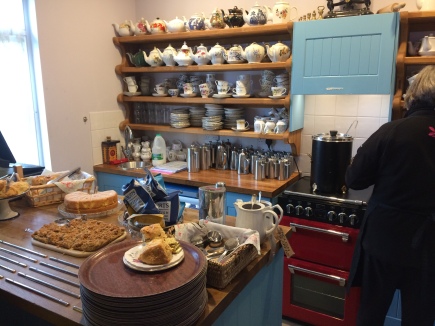 tea time at the lighthouse

The windows have lace curtains and if you look closely, the British flag is waving outside to create a backdrop for our fairy-tale world, made of landscapes, sea, smells and modern sensations, but deeply rooted in the history and customs of the people local.

One thought on “tea time at the “white cliffs of Dover””