A simple question, but… Worth asking!   “ do we really need to waste so much on cocktail garnish?” …never asked your restaurant/bar team … “could we really avoid straws on our boozy filled glasses ?”  Let’s make it straight, this article is for us! It looks like we’re on the right topic but it could perhaps be too late as the environment is suffering bad, this plastic pollution thing especially  is growing fast and enormously. Something seems to have started, and we’re documenting it on a close-up to along with some of the youngest in the hospitality industry. Since our early school days we’ve heard many times talking about it, we have been taught  the good procedures of a correct waste recycling and its purpose. Sometimes just re-cycling can not be enough , especially when it comes to plastic, and the end of the story is a huge-growing sort of artificial island made by plastic and glass waste that has settled down in some areas of the Pacific ocean.

Creativity meets the social responsibility this time! on stage this time, the young generation, speaking about reducing plastic and fruit waste in general, because nothing is as bad and unacceptable as an unconscious bad habits when it comes to looking after ourselves and the planet. 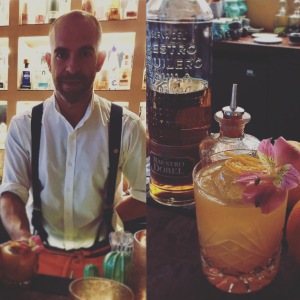 Great and humble as few, the Sardinian barman leads the Mexican restaurant in the luxurious district of Mayfair, Ella Canta. He shares with us its Opinion on the theme:<<Being very sensitive to the theme of the environment, I always prefer to craft and to suggest drinks that don’t have straw and that can directly be sipped by the glass, allowing the smell of good natural zesty perfumes, that cannot be certainly done by drinking with the plastic straw. It’s a guaranteed and unbeatable experience! Just think about those colourful but minimalist decorations of flowers and fresh fruits we create with the team .The drink that I introduce is named “La Rojena” inspired to the distillery of Jose Cuervo, which I have recently visited, and of which I remember to have tasted the first drops straight from cask, along with the master tequilero, we probably started at 9 in the morning up to late night!!>>

Elon Soddu and his libations surrounded by candle lights.

It’s  20:30 hours, light are off and stopped in the whole building of the Savoy hotel, till the 21:30, it is the project “Earth hour” for the “planet 21” promoted by Accor Hotels company, to which the hotel is owned.

Bartender Elon Soddu entertains us in one hour of good drinks, exquisite watching flair techniques of him, while super quickly he works out cocktails for a massive public. His cocktails rework ingredient and fresh fruits the smartest way, with a double use of products that after eventually being squeezed, infused, or pressed to extract flavours, then find second-life on the rim of the serving glass, as a decoration. Shrub of coconut, Cabernet Sauvignon and celery, united to Champagne and “Italicus Rosolio of Bergamotto”, balanced by juice of fresh lemon. “The intelligence of this  drink consists in creating a shrub with certain ingredients to which a second life  is given, after having used them in other preparations.

Romantic and passioned as always, the Greek barman introduces its own talent through cocktail “The Last Straw” being inspired to the more classical one “The Last Word”, and fiercely it tells the recipe of it:

words of Giannis: <<To mark this occasion I have created a cocktail named the Last Straw as we stand shoulder to shoulder with our bar counterparts in our movement to rid plastic straws from refuse. The Last Straw is a long effervescent cocktail , fresh and fruity >>.

Its Name recalls the tropical plant belonging to the Pandanus family (screwpine) which is commonly used widely in South Asian and Southeast Asian cooking as a flavoring. And this is the drink which I choose to pour in a cocktail glass, and as it is my best seller, I am proud to say it has NO STRAWS.

<<I very much enjoy telling you my personal secret on this “pandan cocktail” as I do with the guest that visit Marini’s 57, currently my working place. With pandan we can make delicious cocktail based on its tropical  flavour that also recall old fashioned traditional kitchen recipes. My mission is to spread this message to the world.>>

<<Pandan was famous in culinary recipes such as “Nasi lemak “( coconut rice cooked in pandan ) I love pairing it with chilli paste ,fried chicken and salted anchovies, makes it extremely local and traditional. This variety of food was famous across asian country, not only my hometown Malaysia  but also Indonesia, Thailand and Filipino. Cooking food with pandan it will bring a lot of aromatic flavours. No doubt about it . Famous also in a drink called Cendol (coconut cream, palm sugar, sago) . >> 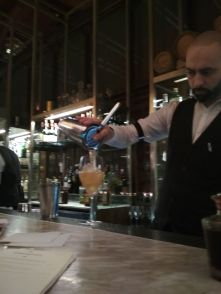 Loaded of perfumes, it remember oriental destinations, markets of the spices, warm beaches and Asian hospitality! The Portuguese barman Joao is fierce of his creation. Also the great American hotels company stands proud on the top edge about this topic of the planet and they vote for a paper straws, as served in my glass!

Riccardo Cella and the team of the Cahoots Bar in London.

in his words: <<Only in Britain in the last year it has been used roughly 8.5 billion straws.
Plastic tubes are an example of how man’s everyday uses can affect the health of our planet. In this case, the plastic of which straws are made is a source of pollution of seas and fresh water because it causes irreparable damage to the health of aquatic animals. The ingestion or inhalation of them causes serious health problems or even death. That’s why London’s government has decided to step advancing an anti-straw campaign to eliminate them by 2018. Luckly, there are alternatives. The most obvious is to eliminate them completely from the drinks. Unfortunately not all the clubs have the possibility of working without them and not every drink can be served without. And here comes the BIO STRAW. The biodegradable drinking straw is made from renewable raw materials instead of those from oil and contributes significantly during disposal 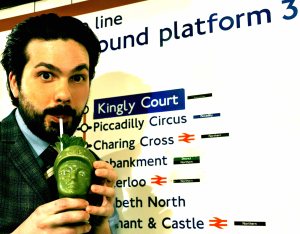 to reduce CO2 emissions, going hand in hand with the Kyoto Protocol targets. Furthermore, at the end of the life cycle it can face natural decomposition processes, becoming an excellent fertilizer for plants. The clubs who are lucky enough to be able to eliminate the straw are following the write direction , but I hope that is not exclusively a marketing maneuver. Otherwise the risk is to fall into hypocrisy once the fashion ends. As we have seen there are viable alternatives. You just need to do an upgrade. By the way since October 2017 Cahoots (and all the venues of Inception Group) has joined the “Eco Friendly” campaign by starting to use biodegradable and compostable drinking straws for his drinks. Moreover, in the new menu that will be released soon, their use has been drastically reduced.>>

The team of the cocktail bar, “La vecchia Lavanderia”Pescara.

The revolution starts from the bar: The “New Lavanderia” says STOP to the indiscriminate use of plastic straws and waste. We have created for our guests on our latest menu release the drink “Peony”. it is a celebration of spring and perfumes, nothing else than a true kick of happiness. Vodka, Syrup of flowers, juice of lemon, pomegranate and a dust created with the exhausted flowers of the syrup and the peels of the citrus fruit used for the juice. A sour, savoury and zesty one. flowers and citrus fruits are combined after being taken away on the night after service. In demonstration that something marvellous can born instead of heading to the bin.

No straw has been subject to “abuse” on the set of this photo!

Ugly fruits?! It seems to be the jingle of a children’s rhyme, but once again the genial nickname of the ingredients behind the winning inspiration of the barman in strength at the famous Roman restaurant “Baccano”, rhyme flood of meaning, that fruits of discard, that he judges “undesirable”, or however not to the acceptable standards of the decorations. Second life for them when kindly they are welcomed in pot, where they express the last juices and tastes and lessential oils giving life to the syrup that adds the sugary note to his cocktail Double Gold Rush! Served in an artistic Old Fashioned Glass with edgings and gilded finishes, on a block of ice and without straw.